Pamuhat Ritual for the Arrival of the Books

I'd like to cross post here something I've posted on my other blog, Ginikanan.com. (Please check it out when you can.)

Dear Charlie and Jack,
Today, I set up an altar in front of the biggest tree in the park grove behind our house. I sat in silence as I thought of the more than 2 year journey that led up to the eventual publication of the book, Mama, Mama. I gave thanks to the spirit that lives in the trees, birds, animals, and everything else around me.  It is the same spirit that lives in me, allowing for the creation of this book; the same spirit that lives in my family, friends, and community allowing them to support me in this project. I also asked for blessings as I face the task of spreading the words that I’ve made tangible. 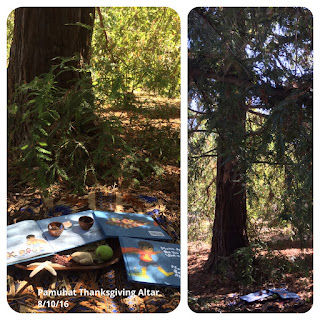 I would have stayed longer but a few kids arrived in the sandbox near the grove and their happy giggles made it hard for me to think. I was also a bit worried of my use of candles in the middle of the pretty dry grove. So I left and came back to make myself lunch and write this.

I think now about the altar I just created. I have never done anything like it before. My child self, the one who was unconscious and deeply colonized by western mentality, would have laughed at what I was doing, would have dismissed the act as “backward”, a meaningless “tinuohan sa buktot” (ways of the hunchback).

Years ago, my mother, your Lola, spearheaded the construction of our home along Sayre Highway in Malaybalay, Bukidnon. I don’t know how long the construction took but when the house was finally finished, your Lola asked a Datu we knew, the one we kids called Datu Pobre (Chief (which can also mean Rich) Poor), to perform a ritual to give thanks to the spirits and to ask their permission and blessings to live in the house.

This is how I remember that event: Datu Pobre, in his faded Binukid garb and headdress, mumbled and blew and spat a lot while he prayed in front of an altar that he had created. Then he gutted a chicken and spread droplets of blood along the entry way and on the altar offerings, including on the mannga, santol, grains of rice, and the smiling Buddha statue that your Lola inherited from her Chinese father. Datu Pobre also buried a few peso coins below the door. After Datu Pobre performed his offerings, the chicken was cooked and we all had chicken soup. Later that day, your Lola took all of us to church to pray for Jesus’ blessings and be blessed with holy water straight from the priest’s hand.

As I unpack this memory, I realize these:

I didn’t know what that ritual was called. I never bothered to know because I thought that kind of ritual was kinaraan and had no place in my life. But now I’m making the effort to know. Pamuhat is the general term for Bukidnon rituals propitiating the many guardian spirits and the deities. There are various rituals for various  reasons: to give thanks, to ask for permission to enter a space, to heal the sick, to seek blessings in an endeavor… Yes, I had to read and google-research to name acts that were once mundane and familiar to me. It is sad that it’s taken me this long to (re)familiarize myself with them and understand their significance! No time for regrets and head bashing over how things were, however. I mourn my years of unconsciousness… and now I inch forward, ready to learn more about my roots, my ginikanan.

It is very likely that the Datu’s name wasn’t really Datu Pobre, that kids like me called him that behind his back to make fun of what we perceived as his laughable poverty. He was always trading his kamote and gabi root crops for my Lolo’s Tanduay rum. It never occurred to me that his trading, even though it didn’t involve the almighty paper money, was another legitimate way of acquiring necessary goods. And a good one, at that! If I could meet with that Datu again, I would apologize, ask his name and call him that. And I pledge to accord others with the dignity they deserve by  acknowledging and accepting who and as they are.

It is also very likely that what we kids thought were the Datu’s mumblings were actual Binukid chant that we just didn’t understand. Because we were taught from a very early age that speaking English equated with intelligence and superiority, we looked down on the indigenous languages and their speakers and, instead, boasted of our mastery of English. Ironically, now I feel robbed of my precious right to (learn to) speak in my ancestor’s language. Again, I mourn my loss… and move forward with the pledge to encourage others to preserve their own mother tongue, whatever it may be, by speaking it with pride in their daily lives and, if possible, passing it on to their children.

I’m also remembering now that because our new house was along the town’s only highway, passersby looked in and those who had nowhere else to be at the very moment stayed to witness. The ritual, therefore, gathered not only our family and friends, but also members of the community, some of whom were strangers to us. It didn’t matter. At the end of the ritual, we all shared the chicken soup together. I assume everybody left sated, happy, and ready to tackle the rest of the day. Out of everything, this realization that rituals involve not just the individual but also a whole bunch of others, is what draws me. We all strive for connection and rituals allow us that. I hope to connect more with the community.

Lastly, the Datu was cool with having the smiling Buddha attend the party. It seems the spirits and deities (even Magbabaya, the supreme deity) can kick it with Jesus and Buddha! There is enough chicken soup for every one willing to share space, regardless of our leanings.

So, my dear Charlie and Jack, this is your Mama reclaiming the ritual for herself (and you!) I hope to channel our Lolas’ ritual making in the days ahead
Posted by Libro at 11:46 PM